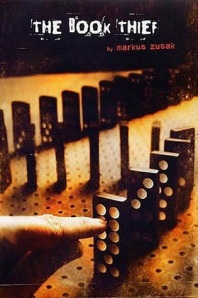 I have gone for a slightly different review on this one, Tried twice to read this but on both occasions just couldn´t get into it, and when my online book club choose this for the August monthly book, I decided to add a whole lot of reviews and comments from various members. I found it great to read all the different opinions. I hope you enjoy them too.

Blurb from goodreads.com, please scroll down the comments.
It is 1939. Nazi Germany. The country is holding its breath. Death has never been busier, and will become busier still.

Liesel Meminger is a foster girl living outside of Munich, who scratches out a meager existence for herself by stealing when she encounters something she can’t resist–books. With the help of her accordion-playing foster-father, she learns to read and shares her stolen books with her neighbors during bombing raids as well as with the Jewish man hidden in her basement.

In superbly crafted writing that burns with intensity, award-winning author Markus Zusak, author of I Am the Messenger, has given us one of the most enduring stories of our time.

Grace Smith:
Finished ‘The Book Thief’ this morning – last few pages. I was born and brought up more than a decade after the end of the war, but have heard many stories about it but never before have I thought deeply about the ‘other side’. I completely agree with both Mary and Linda re the German people during the war, I had no idea how the ordinary man and woman on the street suffered at the hands of their own ‘great leader’ and it brought about a keen awareness of the differences between being German and being a Nazi. Nor did I have any realisation – never having given it any thought – that the concentration camps like Dachau were close enough to towns for the people to walk out there. How dreadful to be hungry and with so little and still be aware that close-by there are others so much worse off just by reason of their birth and religion.
I hated the start of the book, but I detest giving up on a book and stayed with it and I’m glad I did. Have to say I wouldn’t rush out to buy another by the author though, hard work reading this one. What I did enjoy and appreciate was the way all the loose ends were tied up … no lying awake at night wondering what happened to so-and-so! I would give it 4*.

Jeannette Styles Abbott:
I went to visit a penfriend of mine in the former East Germany a few years ago. Took us to a museum in the mountains and upon looking at stacks upon stacks of books, I asked what they were. Her reply was ‘All the names of those that died in the concentration camps’ during the War. I was shocked! She made no secret in pointing out where concentration camps once stood and I got to learn a little as to what life was like for the ordinary German. Also life during the Communist years until the Berlin Wall was pulled down. Hence my interest in books such as The Book Thief.

Jenny Mac
I loved some of the phrases tho, my fave was something like “she collected the words, patted them & hurled them across the table” I’ve a couple of people in mind I wouldn’t mind speaking to like that!

Linda Thomas
There were some magic little phrases tucked away in the book. He was so good at making words up to suit the spot.

Jane Quintanar
I don’t think I would have read this book if not for book club but I did like it (hard to say enjoyed when it’s not a happy topic!). At first the style threw me off a bit but I got used to it. It was interesting to hear about the war and Nazi Germany told from a regular family’s point of view. (yes, I know this isn’t a memoir but I’m sure there were regular families who felt like this one)

Linda Thomas (asks a question)
What did we think of some of the other characters:
Hans Junior, the keen Nazi,
Reinhold Zucker who swaps seats with Hans,
Ilse, the mayor’s wife
anyone else you found interesting…

Theresa ‘Terry’ Hetherington
Ilse I liked her. At 1st thought she might cause problems but she was strong when needed. Papa (Hans) adorable grampa type figure!

Ema Lou
I loved Rudy?? I’ve read a few books since then ha. You know the boy who covered himself in coal and pretended he was the black athlete. I loved his zest for life and loyalty to Liesel and his lack of respect for the hitler youth group but pure determination to see things through to the end. I could see him in my mind’s eye with a cheeky smile and oh I did blub when he went. I was gutted

Theresa ‘Terry’ Hetherington That was sooo sad Ema Lou. Of them all to go so young

Linda Thomas
Yes, Rudy was one of my favourites – the white Jesse Owens! Ilse lost direction when her son died, perhaps because she felt that nobody needed her. Then along came Liesel and gradually made such a difference to Ilse’s life – gave her someone to live for.

Grace J Smith
Reinhold Zucker was not a nice man … felt quite pleased when he died – after all, he was such a git!!

Linda Thomas
Don’t hold back, Grace. Tell us what you think.

Grace J Smith
I love a baddie in a book … and it’s such a rush when the get their just desserts!!!

Amanda Robertson-Sayer
Loved Rudy…..he made me chuckle!! I felt sorry for llise as she seemed so lost until Liesel turned up. I agree with Grace about Reinhold Zucker, i was very pleased that karma got him lol

Jenny Mac
I was a bit frustrated with the book. It was really interesting to read about WW2 from a German point of view, as I’ve only ever read about it from British or Jewish one, but I felt it was a little shallow given the huge potential.

Ema Lou
Thinking back to it do you think she married max or not? I felt kind of cheated from the happy ending after such a sad hard reading book. I’m just a soppy old romantic at heart lol. I agree with someone else (can’t remember who sorry) who said that it was interesting to read from their point of view. Whenever I think of WW2 ive never thought what it was like for normal German families. I just remember being told stories of my granddad being captured and being a POW in Poland (I think) and how awful it was and the bloody German barstewards. He was 5 stone when he came home!!!

Mary Edgley
I was left with this puzzle too, Ema. I DECIDED that they did marry (secretly I do have a romantic soul). That (for me) is the beauty of reading the book rather than watching a movie version…. I choose the end!!!

Amanda Robertson-Sayer
I like to think she married him.

Linda Thomas
So do I, but I like the fact that it wasn’t all spelled out for us.

Ema Lou
Awww now I would Linda ha I wanted my happy ending especially after blubbing like a big girl hehehe
Amanda Robertson-Sayer
I finished this book last week, unfortunately I found it really hard to get into. The writing styles were very hard for me. I didn’t like the way it would talk about what was going to happen in the future and then we would have to go through it all again when we reached that chapter. However, it was a very descriptive book and did get me thinking about the war and what people went through. It did get better towards the end and I read it a bit faster, but I do think that’s so I could finish it quicker!

Linda Thomas
I didn’t like the repetition bit either. I expect there was a reason for it, but I found it a bit irritating.

Amanda Robertson-Sayer
I am glad I read it though, definitely was something a bit different to my normal read.

Jackie Harmer
I did really really try to get into it, but just not my type of book i enjoy, better luck with the next book.

Linda Thomas
Anything in particular that put you off? Or just not for you?

Grace J Smith
I don’t think it was an easy book to get into either Jackie, not sure I would have stuck with it if it hadn’t been for the book club .

Jackie Harmer
Just don’t enjoy that type of book, i like thrillers and true life books, like memoirs and family subjects not slushy and gooie x

Linda Thomas
I loved this book, partly because (like Mary) I was brought face to face with what It was like for “the other side” to live through the war. There are times when we have more in common with the ordinary people of our enemies than we do with our own leaders.
Once I twigged that Death was the narrator, I could follow the really black humour that was running behind the main story. The idea of Death being exhausted gathering souls during the carpet bombing of Hamburg and Cologne was extraordinary – civilians dying in their thousands and Death was trying to tidy up.
The writing was wonderful – I loved the author’s use of language – his way with words. When he said that someone who had died was “full of goneness”, it drew a picture for me of the hole where that person used to live and the emptiness a death leaves behind for loved ones to cope with. Been there, done that, got the t-shirt and it hurts like hell whichever side of a war you are on.
The book brought me face to face with what war means for “them” as well as for “us”. I am so glad to have read it and will read it again in the future.

Mary Edgley
From my perspective, The Book Thief was not an easy read but stayed with me for ages after the first time I read it and I always knew I would read it again. I quite enjoyed the juxtaposition of ‘Death’ being quite human and sometimes the most humane character. I loved Death imposing ‘human’ emotions on inanimate objects (e.g. ‘the wall sighed….’) and in a story encapsulating one of the most dehumanizing periods in history, his complaints about his workload struck chords of irony.
When I read the book, I faced (for the first time in writing) the impact of WW2 on the German people. A post war child growing up with other post war children, the intense dislike (hatred?) of all things German was our daily bread. The book graphically painted the dire straits of life for the people of our enemy ASWELL as the people of MY country. I work on a visual level and found the book very ‘grey’…. grey buildings, grey dust, grey skies, grey people a world with little hope except at best to survive each day.
In amidst the grey, the little girl, her foster-father and mother, the Jewish guy and Rudy (dear loveable Rudy) became oasis of colour that held me through the greyness. Yet again my eyes were damp at the end.
I am glad I have read it a second time and now feel I’ve ‘done’ the book. I am satisfied that between the first and the second reading I have taken from the book as much as I want and I too was glad to flick the final page but also very glad it was the choice this time for the Book Club.

3 thoughts on “Special Review – The Book Thief by Markus Zusak”