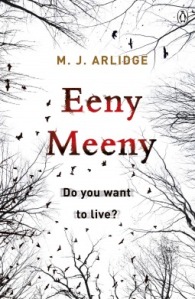 Blurb from goodreads.com, please scroll down for my review.
They were going to spend the rest of their lives together. Soul mates. But when a young couple wakes up alone together, disoriented and trapped, they are yet to grasp the true horror of their situation. They have no food, no water. Instead there is a gun loaded with a single bullet and a mobile phone with enough power only to deliver a short message: ‘when one of you kills the other, the survivor will walk free’. For their captor it’s simple: set the scene, watch, wait and leave the victims to do the killing. Tortured by fear, desperation, starvation and thirst, there’s only one way to end their ordeal: one of them must die.

DI Helen Grace and her team know they are hunting a complex predator whose broken survivors must endure their role as living calling cards. And killers. The victims – work colleagues, a mother and daughter, a pair of dancers – appear to be chosen at random and yet the planning is meticulous.

There must be something driving the choice of victims, but until DI Grace can establish a connection, the killer is unreachable. A breakthrough is elusive and then, terrifyingly, the investigation begins to turn full circle…

In this startling highwire drama M.J. Arlidge throws us headlong into a chilling race to stop evil in its tracks. Dark, ingenious and bullet-paced, Eeny Meeny introduces a major new thriller writing talent.

My Review.
Spoilers in the review.
After a couple of not too sure if I enjoyed them and didn´t finish books I read this for my online book group, and wow, definitely worth it if you enjoy a dark crime book. Where the idea of this came from? What was going on in the author head? I have no idea. Two people stuck in one room, one gun with one bullet, there is only one way out, one of them has to kill the other. Creepy. Otherwise you don´t get out and you both starve to death. OK the idea might be new but it is no something i have come across recently.

Introducing Helen Grace, a no messing around detective who is in charge of the investigation, but I couldn´t warm up to her character, she was a little cold and calculating for my liking.

Each chapter is written from the point of view of a different person, with short chapters, making it easy to put down when needed, not that I could, it is one of those cannot put down books. This is a fast paced crime thriller, with loads going on and it kept me guessing as to who was behind it all until the author decided to tell us. The best part, well the fact that the baddie is a female, about time, so many books and films with males in the bad parts. The person behind all of this is actually quite clever; there are plenty of twists in the tale.

There is some interesting moral choices here, after all what would you do in the same situation.

Start spoilers. There are a few parts in the book that aren´t explained properly: Were the victims being watched? Otherwise how did the killer know that one had killed the other as Peter, Charlie and Amy are freed as soon as the deed is done. Why wasn´t Marie freed?

I enjoyed the little twists also, it didn´t matter that in the case of Peter and Ben & Marie and Anna the gun wasn´t used and that Mark committed suicide.

I was thrilled to get to the end and discover there is a follow up book, roll on September 2014.

This is the authors debut novel.