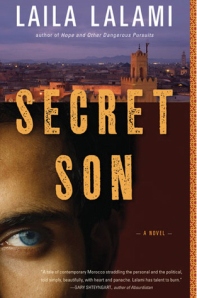 Raised by his mother in a one-room house in the slums of Casablanca, Youssef El Mekki has always had big dreams of living another life in another world. Suddenly his dreams are within reach when he discovers that his father—whom he’d been led to believe was dead—is very much alive. A wealthy businessman, he seems eager to give his son a new start. Youssef leaves his mother behind to live a life of luxury, until a reversal of fortune sends him back to the streets and his childhood friends. Trapped once again by his class and painfully aware of the limitations of his prospects, he becomes easy prey for a fringe Islamic group.

In the spirit of The Inheritance of Loss and The Reluctant Fundamentalist, Laila Lalami’s debut novel looks at the struggle for identity, the need for love and family, and the desperation that grips ordinary lives in a world divided by class, politics, and religion.

Not the best book I have read and far from the worst. It didn´t stand out much. What I did enjoy was the setting. Morocco is somewhere I have never been but would like to go so it gives a change of scenery from most of the books based in USA. The story is all about one young man and his background, his difficulties with life as he has just found out that is father is alive, rather than dead as his mother has told him over the years. The young man comes from a poor neighbourhood and on meeting his father the world opens up to him. It´s all about growing up, studying, family, life values, making the right decisions. Etc. There is a lot about the political and social times in Morocco. I am glad I read it, it is short so I finished it in a couple of days, but it is not one to write home about.

I am not sure the title is appropriate as the Youssef isn´t a secret, his father has no idea he is exists, until Youssef goes and presents himself in his office.

Anyone interested in social, political, Morocco, growing up will enjoy this, it wasn´t for me but I did finish it.

Laila Lalami was born and raised in Morocco. She attended Université Mohammed-V in Rabat, University College in London, and the University of Southern California, where she earned a Ph.D. in linguistics. She is the author of the short story collection Hope and Other Dangerous Pursuits, which was a finalist for the Oregon Book Award, and the novel Secret Son, which was on the Orange Prize longlist. Her essays and opinion pieces have appeared in Newsweek, the Los Angeles Times, the Washington Post, The Nation, the Guardian, the New York Times, and in numerous anthologies. Her work has been translated into ten languages. She is the recipient of a British Council Fellowship, a Fulbright Fellowship, and a Lannan Foundation Residency Fellowship and is currently an associate professor of creative writing at the University of California at Riverside. Her new novel, The Moor’s Account, will be published by Pantheon in 2014.