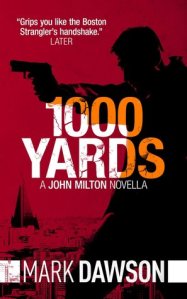 blurb from goodreads.com, please scroll down for my review. Meet John Milton He considers himself an artisan. A craftsman. His trade is murder. Milton is the man the government sends after you when everything else has failed. Ruthless. Brilliant. Anonymous. Lethal. You wouldn’t pick him out of a crowd but you wouldn’t want to be on his list. But now, after ten years, he’s had enough – there’s blood on his hands and he wants out. Trouble is, this job is not one you can just walk away from. He goes on the run, seeking atonement for his sins by helping the people he meets along the way. But his past cannot be easily forgotten and before long it is Milton who is hunted, and not the hunter. 1000 Yards This 17,000 word novella is an introduction to John Milton, the most dangerous assassin in the pay of Her Majesty’s government. Milton is sent into North Korea. With nothing but a sniper rifle, bad intentions and a very particular target, will Milton be able to take on the secret police of the most dangerous failed state on the planet? My Review

This is an introduction novella style book. We meet John Milton, in North Korea, and what an introduction, from the first sentence you are led on a short journey of thrills. As it is only short (17,000 words) it can be read very quickly, and then you will want more. The book is well researched, and that, at least for me makes it more enjoyable, there are real locations used in North Korea, a country I will probably never visit. I did wonder at one point what the title meant, I figured it out as there is a great reference to it in the book itself.

“Milton adjusted the rifle´s range to ten plus two, one thousand yards plus two minutes of angle.

Read the review of The Cleaner by Mark Dawson HERE

Read the review of Sword of God by Mark Dawson HERE 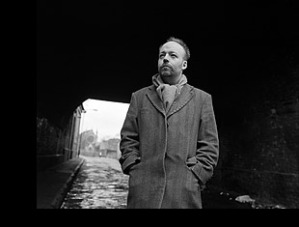 Mark Dawson was born in Lowestoft, in the UK. He has worked as a DJ, a door-to-door ice cream seller, factory hand and club promoter. He eventually trained as a lawyer and worked for ten years in the City of London and Soho, firstly pursuing money launderers around the world and then acting for celebrities suing newspapers for libel. He currently works in the London film industry. He is presently writing two series. The John Milton books involve a disgruntled British assassin who is trying – without much success – to put his past behind him. In order to atone for the blood on his hands he has decided to help those in need. The first full length novel in the series, The Cleaner, sees Milton struggle to adapt to life amongst the gangs of East London during the riots of the summer of 2012. The Cleaner, and the other books in the series, have all been best-sellers in their categories at Amazon and Barnes and Noble. The Soho Noir books, beginning with The Black Mile and continuing with The Imposter, follow the glitz and glamour of criminal life in London’s West End from the 1940s to the present day. The Imposter picks up the nefarious goings on of the Costello crime family and a protagonist who is rather more than meets the eye. Think of The Sopranos set in Soho and you’ll be on the right track. This series, too, has been downloaded tens of thousands of times. Mark lives in Wiltshire with his wife and two young children, plus a dog and two cats.