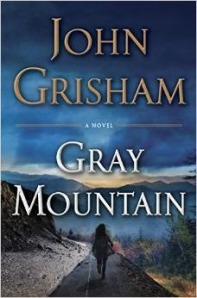 The year is 2008 and Samantha Kofer’s career at a huge Wall Street law firm is on the fast track—until the recession hits and she gets downsized, furloughed, escorted out of the building. Samantha, though, is one of the “lucky” associates. She’s offered an opportunity to work at a legal aid clinic for one year without pay, after which there would be a slim chance that she’d get her old job back.

In a matter of days Samantha moves from Manhattan to Brady, Virginia, population 2,200, in the heart of Appalachia, a part of the world she has only read about. Mattie Wyatt, lifelong Brady resident and head of the town’s legal aid clinic, is there to teach her how to “help real people with real problems.” For the first time in her career, Samantha prepares a lawsuit, sees the inside of an actual courtroom, gets scolded by a judge, and receives threats from locals who aren’t so thrilled to have a big-city lawyer in town. And she learns that Brady, like most small towns, harbors some big secrets.

Her new job takes Samantha into the murky and dangerous world of coal mining, where laws are often broken, rules are ignored, regulations are flouted, communities are divided, and the land itself is under attack from Big Coal. Violence is always just around the corner, and within weeks Samantha finds herself engulfed in litigation that turns deadly.

My Review.
I have always loved John Grisham, but this wasn´t one of his best, in fact I didn´t really enjoy this at all, but I did finish the book. It is very similar book to his others, but there was no punch to it, no surprises or twists in the tale.
The part I enjoyed was the female character, ok, maybe I didn´t like her much, what I enjoyed was that there was a female character, it is not very often this author writes with a female main character but I had figured out her choice of place to live early on, it seemed rather obvious to me despite the author writing that she wanted to return to New York plenty of times.
The coal mining parts were very interesting, with plenty of details, I also enjoyed the details of the area the author wrote about.
The issues covered, coal mining, with it´s mountaintop removal is worrying, with definite health and environmental impacts.
I was disappointed with the ending, it was so abrupt and also gives the idea that there might be a second with the same characters. I probably won´t be reading that one if there is a sequel.