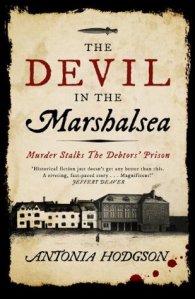 London, 1727 – and Tom Hawkins is about to fall from his heaven of card games, brothels and coffee-houses to the hell of a debtors’ prison.

The Marshalsea is a savage world of its own, with simple rules: those with family or friends who can lend them a little money may survive in relative comfort. Those with none will starve in squalor and disease. And those who try to escape will suffer a gruesome fate at the hands of the gaol’s ruthless governor and his cronies.

The trouble is, Tom Hawkins has never been good at following rules – even simple ones. And the recent grisly murder of a debtor, Captain Roberts, has brought further terror to the gaol. While the Captain’s beautiful widow cries for justice, the finger of suspicion points only one way: to the sly, enigmatic figure of Samuel Fleet.

Some call Fleet a devil, a man to avoid at all costs. But Tom Hawkins is sharing his cell. Soon, Tom’s choice is clear: get to the truth of the murder – or be the next to die.

A twisting mystery, a dazzling evocation of early 18th Century London, THE DEVIL IN THE MARSHALSEA is a thrilling debut novel full of intrigue and suspense.

Great, great book, I always think historical fiction must be hard to write with all the research required and this is a great book, The Devil in the Marshalsea is all about the now non existent Marshalsea Debtors prison in Southwark in 1727.  Tom Hawkins is a bit of a free spirit estranged from his family and gets himself into debt, caught and imprisoned, the place is horrible and the author makes you feel as if you are also inside, “shudders”. There are characters and locations like the  that were actually there, like Titty Dolls and the coffee shop. http://en.wikipedia.org/wiki/Marshalsea

“I had an appointment with a ghost. It seemed impolite not to attend.”

I found myself using the kindle inbuilt dictionary loads as there are many words from that period of time which are now not in use. The details and language are just great, loads of research has been done by the author.  Marshalsea is a small village as the rules, well, maybe there are not rules as such are different, you need to have money to survive there. Reminds me a little of the prisons in South America, and of one in particular in La Paz, Bolivia.

The characters are colourful, some a little scary and the descriptions bring alive the prison and London of the era.

“That could me my voice I thought, a few shillings less and I could be locked away with them.”

This is a fantastic debut novel with a great ending that surprised me, I can recommend this if you enjoy historical murder mysteries.

I was born in Derby in 1971, the same year David Bowie released Hunky Dory. (This is not significant. I just happen to like Hunky Dory.) I studied English at the University of Leeds from 1991-4, majoring in medieval literature, road movies, Icelandic sagas and cheap red wine. One of these proved useful in my chosen career of publishing.