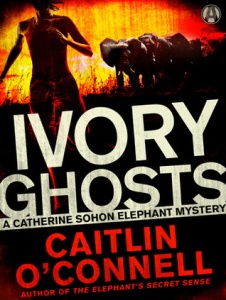 blurb from goodreads.com, please scroll down for my review.

In a blockbuster debut thriller brimming with majestic wildlife, village politics, and international intrigue, a chilling quadruple homicide raises the stakes in the battle to save Africa’s elephants.

Still grieving over the tragic death of her fiancé, American wildlife biologist Catherine Sohon leaves South Africa and drives to a remote outpost in northeast Namibia, where she plans to face off against the shadowy forces of corruption and relentless human greed in the fight against elephant poaching. Undercover as a census pilot tracking the local elephant population, she’ll really be collecting evidence on the ruthless ivory traffickers.

But before she even reaches her destination, Catherine stumbles onto a scene of horrifying carnage: three people shot dead in their car, and a fourth nearby—with his brain removed. The slaughter appears to be the handiwork of a Zambian smuggler known as “the witchdoctor,” a figure reviled by activists and poachers alike. Forced to play nice with local officials, Catherine finds herself drawn to the prickly but charismatic Jon Baggs, head of the Ministry of Conservation, whose blustery exterior belies his deep investment in the poaching wars.

Torn between her developing feelings and her unofficial investigation, she takes to the air, only to be grounded by a vicious turf war between competing factions of a black-market operation that reaches far beyond the borders of Africa. With the mortality rate—both human and animal—skyrocketing, Catherine races to intercept a valuable shipment. Now she’s flying blind, and a cunning killer is on the move.

I was attracted to this book due to the title and the subject: elephant poaching in the Caprivi Strip, Namibia. Unfortunately this isn’t the thrilling book I was expecting, there is a little bit but not enough to keep my attention for long. The good parts is the author really knows her stuff, at least she seems to anyhow, after all I don’t know much about poaching elephants. Also she has done a good job with the details of the area. The characters are interesting, with such different backgrounds and visions of life which create problems for our main character Catherine. She turns out to be more of a detective than a pilot, getting herself in to tight spots which really seemed a little excessive.

The best part of the whole book are the details of the area, the details of the elephants, Africa is a fascinating continent and so is the area she writes about. I hope to see more books from the author as she matures as I love the area. Netgalley ARC. 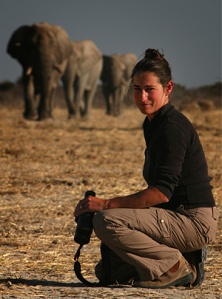 Dr. Caitlin O’Connell is a Consulting Assistant Professor in the Department of Otolaryngology, Head & Neck Surgery at Stanford University School of Medicine and a world renowned expert on elephants and vibrotactile sensitivity. She is the author of the internationally acclaimed nonfiction science memoir, The Elephant’s Secret Sense (2007, Free Press), which highlights a novel form of elephant communication as well as their conservation plight. Her narrative nonfiction photo book An Elephant’s Life (2011, Lyons Press) uses a graphic novel approach to revealing subtle and intimate aspects of elephant society. Her co-authored nonfiction children’s book, The Elephant Scientist (2011, Houghton Mifflin Children’s Books) won five awards, including the Robert F. Sibert Honor and Horn Book Honor for 2012. A Baby Elephant In The Wild (2014, Houghton Mifflin Harcourt Books for Young Readers) is a Junior Library Guild Select and winner of the 2015 NSTA award for Outstanding Science Trade Book for students K-12. Elephant Don: The Politics Of A Pachyderm Posse (University of Chicago Press) comes out May, 2015. Her debut novel, Ivory Ghosts, comes out with Random House, April 7, 2015. O’Connell is the co-founder and CEO of the nonprofit organization, Utopia Scientific (www.utopiascientific.org), dedicated to research and science education. She is also co-director of Triple Helix Productions, with a mandate to develop more accurate science content for the media. She has taught Science Writing for Stanford University and The New York Times Knowledge Network.